The New York City Departments of Transportation (DOT), Environmental Protection (DEP) and Design and Construction (DDC) today announced the beginning of a $9 million project to expand and beautify Morrison Avenue Plaza, at the southeast corner of Morrison Avenue and Westchester Avenue in the Soundview neighborhood of the Bronx. The project, which is anticipated to be completed in winter 2021, is being managed by DDC for DOT and DEP. 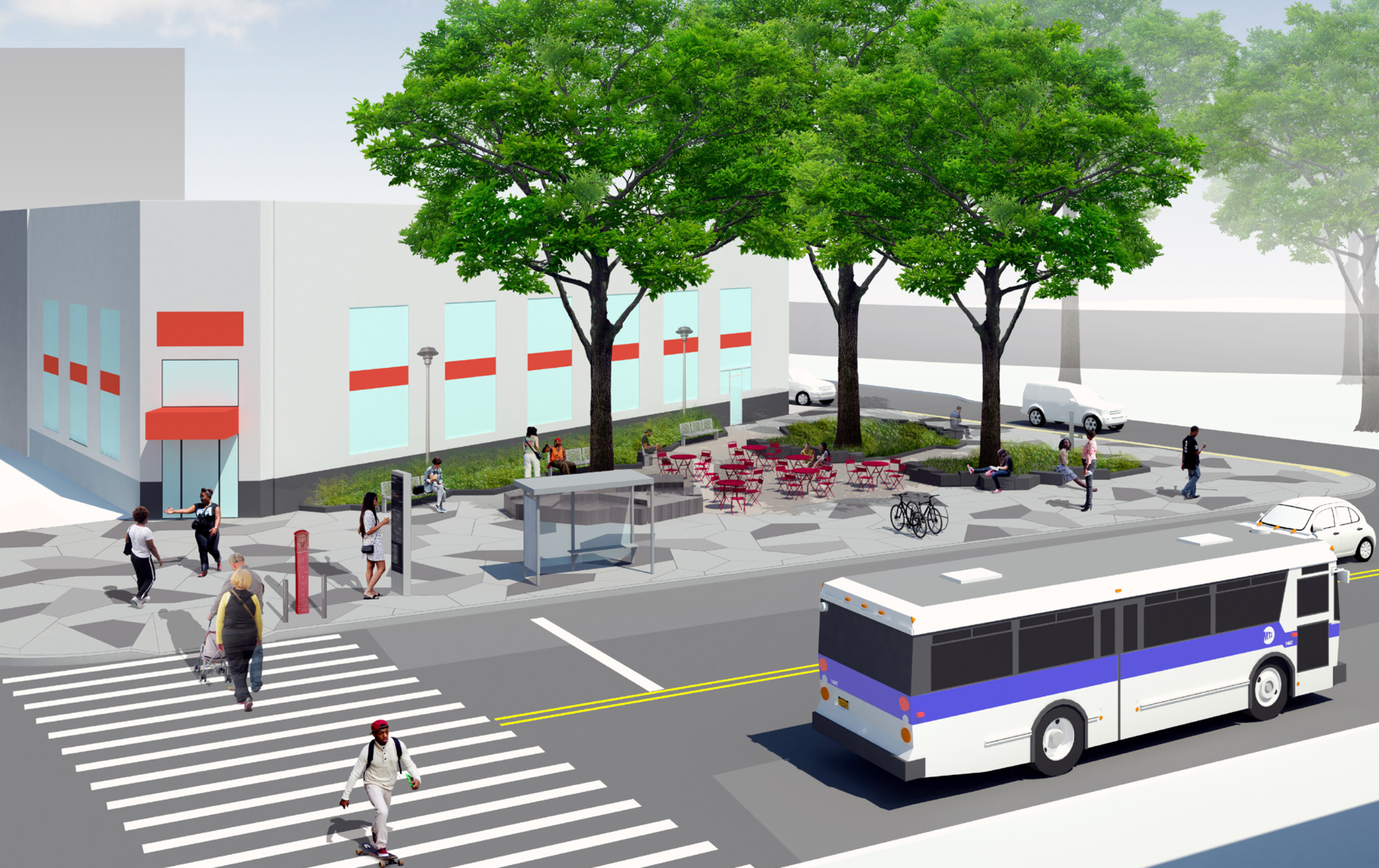 “We are proud to today officially start the transformation of the Morrison Avenue Plaza, which will enhance a major public space here in Soundview,” said DOT Commissioner Polly Trottenberg. “When finished, this plaza will no longer simply serve as a passage ground for commuters and residents rushing to and from the Morrison Avenue 6 subway station, but will become a safer and more welcoming space with increased pedestrian space, new lighting and crosswalks, bike racks, a drinking fountain and easy access to the newly renovated ‘Parque de los Ninos’ playground. Special thanks to our amazing sister agencies, including DEP and DDC, for their partnership and to my former colleagues at Federal DOT for financing an important project that will support both safety and quality of life in the South Bronx.”

“DEP is pleased to partner with DOT and DDC to create a beautiful public space for the residents of Soundview. The $4.2 million in funds provided by DEP will go toward an upgrade of the drinking water delivery system and storm sewers, as well as the installation of new catch basins to reduce street flooding,” said DEP Commissioner Vincent Sapienza.

“The new Morrison Plaza will beautify the community while adding more space for pedestrians and improved infrastructure for water deliver and stormwater drainage,” said DDC Commissioner Lorraine Grillo. “DDC is a key part of the Plaza Program that has been expanding pedestrian access and implementing Vision Zero safety techniques in every borough.”

“The expansion of the Morrison Avenue Plaza will bring much needed space for our youth and community residents. We must continue reclaiming our streets for pedestrian and cyclist use,” said Council Member Ydanis Rodriguez, Chairman of the Transportation Committee. “The open streets initiative should be seen as a precursor to permanent pedestrian plazas. I will continue to work alongside DOT Commissioner Polly Trottenberg, Speaker Corey Johnson, and my colleagues at the Council to ensure we continue increasing the number of plazas available to all New Yorkers.” 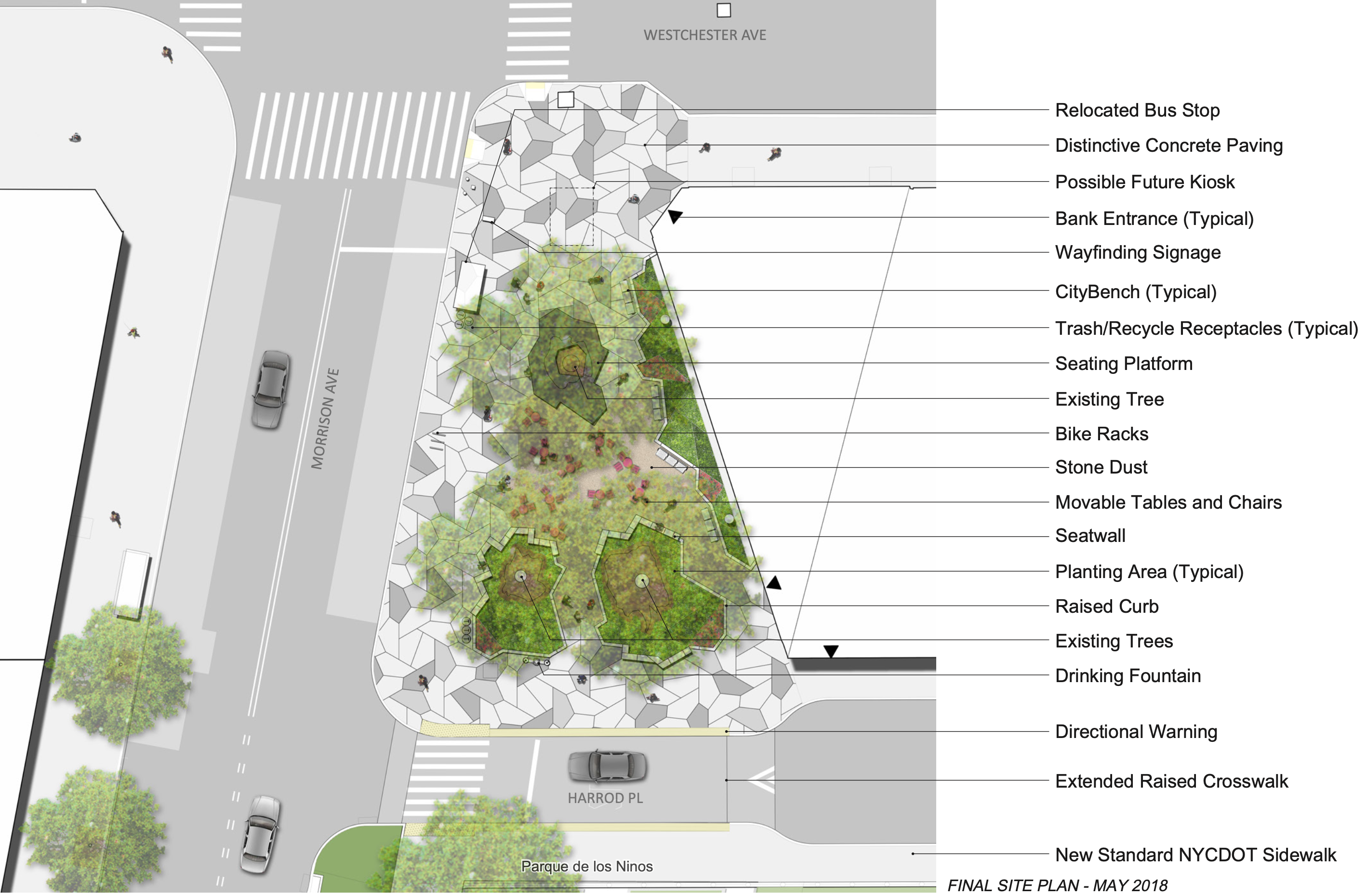 Morrison Avenue Plaza was accepted into the NYC DOT Plaza Program in 2013 and implemented in interim materials in 2014. The plaza is managed by Youth Ministries for Peace & Justice (YMPJ), a youth center active in the communities of the Bronx River and Soundview areas in the South Bronx. As the plaza partner, YMPJ works cohesively with DOT to activate and program Morrison Plaza as a community asset for the neighborhood. The plaza is also part of the OneNYC Plaza Equity Program and receives subsidized sanitation and maintenance services in partnership with the Horticultural Society of New York and ACE New York.

The plaza which sees thousands of pedestrians on their daily commutes will be expanded by 2,4000 square feet. The transformation will also include new decorative concrete paving, granite seating, planting areas, additional lighting, bike racks, movable tables and chairs, and other amenities to enhance walking and cycling along the bustling Westchester Ave corridor. The project will connect the plaza to the recently renovated ‘Parque de los Ninos’ playground on Harrod Place with a new, extended raised crosswalk that will prioritize pedestrians and shorten the crossing distance. These enhancements along with new street lighting and traffic signals will provide safety benefits to the surrounding area.

Harrod Place will also be fully reconstructed from Westchester Avenue to Morrison Avenue. Additionally, below ground, 600 feet of old 8- and 12-inch water mains will be replaced, along with 260 feet of 12-inch diameter storm sewer. New catch basins will also be added to reduce street flooding. Funding contributions for Morrison Ave Plaza was provided by the City, the Federal Transit Administration and the Transportation Alternatives Program (TAP) administered by the Federal Highway Administration.

About the NYC Department of Transportation

NYC DOT’s mission is to provide for the safe, efficient, and environmentally responsible movement of people and goods, and to maintain and enhance the transportation infrastructure crucial to the economic vitality and quality of life of New York City residents. More than 5,000 DOT employees oversee one of the most complex urban transportation networks in the world, managing 6,000 miles of streets and highways, 12,000 miles of sidewalk, and 794 bridges and tunnels, including the iconic East River bridges. Our staff also installs and maintains more than one million street signs, 12,000 signalized intersections, 315,000 street lights, and 200 million linear feet of street markings. DOT promotes the use of sustainable modes of transportation, designing bicycle facilities, bus lanes, and public plazas. DOT also operates the Staten Island Ferry, which serves over 22 million people annually.

About the NYC Department of Environmental Protection

DEP manages New York City’s water supply, providing approximately 1 billion gallons of high-quality drinking water each day to more than 9 million residents, including 8.3 million in New York City. The water is delivered from a watershed that extends more than 125 miles from the city, comprising 19 reservoirs and three controlled lakes. Approximately 7,000 miles of water mains, tunnels and aqueducts bring water to homes and businesses throughout the five boroughs, and 7,500 miles of sewer lines and 96 pump stations take wastewater to 14 in-city treatment plants. DEP has a robust capital program, with a planned $20.1 billion in investments over the next 10 years that will create up to 3,000 construction-related jobs per year. For more information, visit nyc.gov/dep, like us on Facebook, or follow us on Twitter.

About the NYC Department of Design and Construction

The Department of Design and Construction is the City’s primary capital construction project manager. In supporting Mayor de Blasio’s long-term vision of growth, sustainability, resiliency, equity and healthy living, DDC provides communities with new or renovated public buildings such as firehouses, libraries, police precincts, and new or upgraded roads, sewers and water mains in all five boroughs. To manage this $14 billion portfolio, DDC partners with other City agencies, architects and consultants, whose experience bring efficient, innovative and environmentally-conscious design and construction strategies to City projects. For more information,

Succession Certificate and Letter of Administration

Govenered NYS dunyaintl - March 7, 2021
0
Program Was Designed to Assist Essential Workers and First Responders with Urgent Economic Needs Amidst Ongoing COVID-19 Pandemic  Up to $1,000 Available per Household from...