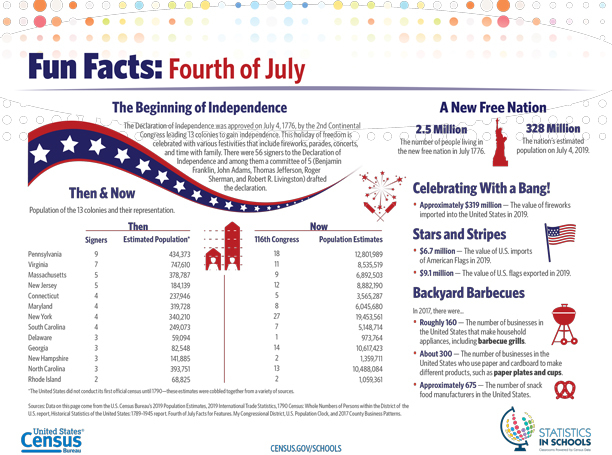 On July 4, 1776, the Continental Congress approved the Declaration of Independence, setting the 13 colonies on the road to freedom as a sovereign nation. As we celebrate this Independence Day, we reflect on how our Founding Fathers enshrined in our Constitution the importance of statistics as a vital tool for measuring our people, places and economy.

The following facts are possible thanks to responses to U.S. Census Bureau surveys. We appreciate the public’s cooperation as we continuously measure America’s people, places and economy.

The estimated number of people living in the newly independent nation in July 1776. Source: Historical Statistics of the United States: 1789-1945

The number of signers of the Declaration of Independence.

It is also worth noting that:

The value of fireworks sales by establishments classified as NAICS 453998, all other miscellaneous store retailers (except tobacco stores) in 2012. Source: 2012 Economic Census, Table EC1244SLLS1, NAICS 453998

Newspaper is your news, entertainment, music fashion website. We provide you with the latest breaking news and videos straight from the entertainment industry.
Contact us: admin@dunyaintl.com

We are Beginning To See a Light At The End of...